Crimes against humanity and genocide of Ukrainians. Bucha massacre.

The world must remember this word – Bucha, as he remembers Srebrenica, Babyn Yar, Auschwitz…

Bucha is a village on the outskirts of Kyiv, where there was nothing but houses and civilian infrastructure. Happy children and their parents lived here before the war.

The Bucha massacre – it cannot be called otherwise – is meaningless, but has no human explanation. For a month, the Russian occupiers looted, killed, and raped civilians. Why did they destroy unarmed people?

People in Bucha, as well as in Mariupol, Chernihiv, Sumy, Kharkiv, were killed simply because they were Ukrainians and lived in Ukraine. Thus, this destruction is on the basis of nationality, which means that it falls under the definition of genocide.

Article 2 of the 1948 Convention on the Prevention and Punishment of the Crime of Genocide recognizes as genocide acts committed with the intent to destroy, in whole or in part, any national, ethnic, racial or religious group as such, and expressed in:

“Therefore, the events in Irpen, Bucha and other settlements can be considered genocide of the Ukrainian nation,” Zoryana Skaletska said. the extermination of Ukrainians on national grounds. ”

What we saw in Bucha, and may still be recorded with a high probability in other cities and villages of Ukraine, can be qualified as a crime against humanity. We will need to establish a connection between the consequences of the actions of the russian military and the motives for their not just terror, but de-Ukrainization, denationalization, and the destruction of the Ukrainian nation. 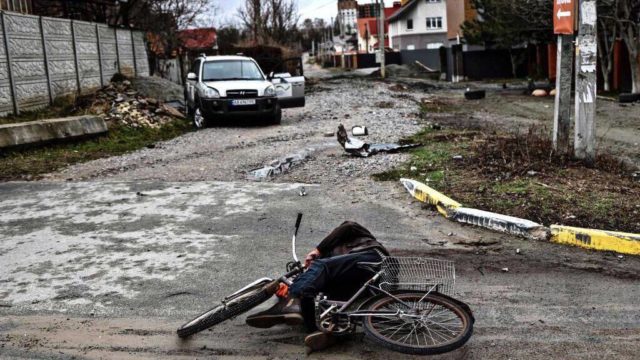 After the liberation of Bucha by the armed forces of Ukraine, a terrible picture appeared before the whole world: houses were destroyed, the streets of the village were covered with the bodies of killed and tortured people. This was announced by Mayor Anatoly Fedoruk to the French news agency AFP. “In Bucha, we have already buried 280 people in mass graves. The streets of the heavily destroyed city are littered with corpses,” he said.

We will never forgive …

Humanitarian assistance to Ukrainians together with ATY: all essential goods

Humanitarian assistance for condomini-ums and the military enlistment office

Humanitarian support for the Huliaipole defenders